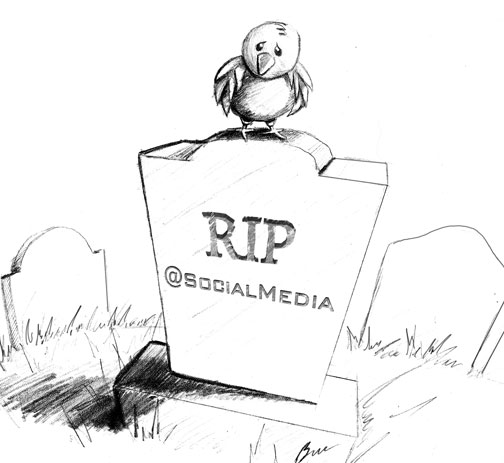 The below is a follow-up to a post I wrote back in July 2010. First, the original post, then the follow-up:

Death and Social Media
This is a morbid way to discuss an idea, but let’s talk about death. And while we’re at it, let’s talk about social media. I was (briefly, fleetingly) thinking about what would happen after I die, and the kinds of things people would remember about me. (And more exactly, the kinds of things I hope people will remember about me.)

In my life, (and I’m not quite done yet,) I have created volumes of content in the social media world: blog posts, and blog comments, Facebook statuses and comments and likes and picture uploads and all those Tweets, reTweets and direct messages on Twitter! I’ve yelled about firing the head coach of my beloved Buffalo Bills on the fan forums on buffalobills.com, and helped people solve technical problems on support forums for Apple computers and some software platforms. I’ve written record and book reviews on iTunes and Amazon. I’ve uploaded and even commented on videos posted on YouTube! (Eeek. What a geek.)

So I wondered, will this become part of what people remember about me? Will there be people at my funeral saying, “yeah, nice guy…oh! And did you see his Tweets from the IAB mobile conference back in 2010? So insightful.” Instead of a collage of photos, will there be a screen somewhere with a streaming feed of my life’s digital output?

On one hand, I seriously doubt that these bits and bytes of my recommendations, forwards, hashtag snips and extemporanea will have any bearing on what people think about me. But on the other, there’s no getting around the fact that social media content is now a contributing editor to my legacy. I also submit that I think it would be an interesting, revealing and even fairly intimate way to chronologically peek into the ebbs and flows of my (mostly) professional life. Which makes me think: are we (am I?) Tweeting accordingly? Is the overall tone of my social commentary admirable/useful/honorable? Will my children be proud of what they read? Does it really matter how many check-ins I have, or if I’m the bloody mayor of some local bar? Jeez…maybe we better start looking at all of this in context.

In older days, we might have discovered a diary under a bed, or a journal tucked away in a closet somewhere, long after the departure of a loved one. But now, we have a digitized database of someone’s every thought and comment for years and years. And since most people in the world will never author a book, or write a professional article in a real journal, or be interviewed for television or radio, is the chronicling of social media verbiage a new means to endure? [Uh oh, I think I smell a new business model being hatched.]

Follow-up [September 2011]
So it turns out I was on to something about new business models being hatched, and people starting to talk about this morbid stuff with a more, um, opportunistic tone. A year after my blog post, a journalist named Adam Ostrow gave a TED talk that covered this topic – and outlined some new business models that are indeed being hatched at the intersection of death and social media as “opportunities for technologists.”

The first (and perhaps weirdest) is ifidie.net, a service that lets you create a message or video to be posted to Facebook after you die. Check out their website…kind of a wacky approach to a fairly serious topic.

“My Next Tweet” is a service that uses an algorithm to predict what your next (and perhaps last) bit of social output would be on Twitter by analyzing all your previous tweets and retweets.

Finally, Ostrow points out 1000 Memories, a service that allows you to organize, share and ultimately post a collection of photos, memories, writings and more to Facebook or an area of their site. Not just for the dead, apparently.

On the flipside of all that nonsense, there is a beautiful side-effect to digitizing one’s last days. I recently read a gorgeous narrative by Rebecca Armendariz chronicling a series of Gchats with her lover that is both heartwarming and gut-wrenching, and exquisitely written. Read it and (be prepared to) weep.

I suppose all of this does lend gravitas to the idea of self-monitoring your digital expressionism. Once you’re gone to the great mashup in the sky, you don’t want one of these dopey services misrepresenting your life’s social work. So if today is indeed the beginning of the end of your life, social-ize accordingly.