Have you heard of the Butterfly Effect?  It’s a chaos theory-based rubric attributed to Edward Lorenz for explaining the sensitivity of the dependence on initial conditions relative to widely dispersed outcomes.  The theory is expressed in the saying “the flap of a butterfly’s wings in Thailand can set off a tornado in Texas.”

Okay, so what does that have to do with marketing, especially for small to midsized companies? If you drill down into the Butterfly Effect statement, you learn that small, seemingly insignificant actions can, in time and to a great degree, affect or evolve into great, often extraordinary results not easily conceived in context of the original event.  And conversely, you see that the auspices of great outcomes can be found to have relatively benign provenance.

In marketing, we’re often overcome trying to “think big” and “make it rain” and “blow it out,” and a zillion other clichés of bigness.  The truth, however, is that we can sometimes reach these astonishing aims by applying the Butterfly Effect and initiating small actions and – this is the key – setting them on the right course.

Here’s a simple viral marketing example:  you put a status up on Facebook, for instance, and tell 10 of your friends to pass it to ten of their friends, and so on.  Perhaps you’re promoting a secret concert of a popular band.  How many times does this have to be passed on for your initial (small) action to have a great effect?  In just four repeats of your original action (tell ten friends,) you have 100,000 screaming fans show up at the concert.  Uh oh – only 20,000 seats! So, sure, there’s very little chaos there.  But you can see how quickly simple actions can scale outward to a great degree.

Social media is really the Butterfly Effect in action in today’s marketing world.  Brands are seeding conversations, and then setting them off into the ether.  And in an extremely democratic (and sometimes terrifying) manner, the brand is weaved into conversations by people, and expanded, and turned into recipes or planking videos or mashups or hashtags.  Who knows? It’s chaos, but it’s usually good for the brand.  Sometimes (see AdFreak’s recent post on ChapStick’s social debacle,) it’s not so much.

One last point.  It doesn’t have to be social media.  You can start generating big marketing effects through small actions in lots of ways.  It could be a new merchandising program, a refresh of your menu, seeking new talent, or adopting a cause, or a new partnership, or a next blog post.  It could be anything.  But it has to be something and it has to be started.

A few keys to applying the Butterfly Effect:

Chaos. An important aspect of all of this is that it’s painfully hard for mere mortals to calculate chaos.  [An easy task for a math-head.  Not for me.] So it’s easy to imagine outcomes that are too likely.  The Butterfly Effect is constantly evolving, ever shifting and morphing into outcomes that, while predicated on the action before it, often do not travel a predictive pathway.  Get with that.

Direction. Don’t think about the outcome, because you often have little or no control over it.  Just ensure that the initiating action is set off in the right direction, is well-intentioned and is aligned with your brand values.  The rest is the market’s work, with all its environmental and evolutionary vagaries. Indeed, the chaos is part of the fun of watching this theory in action.

Distance (whether it’s measured in time or space) is a necessary factor.  You can’t expect these great things to happen in sixteen minutes.  Be patient, and integrate the Butterfly Effect along with your other, more urgent, plans.  If you launch a rocket in the air, and then measure its effectiveness in six seconds, you’ve failed to reach the stars.  Measure again in four hours, and you’re dancing among them.

How does this apply to your brand?  What can you START today?  What ten things can you start today?  Even if it’s a small but pertinent action that can evolve, it’s probably worth it. So start flapping. 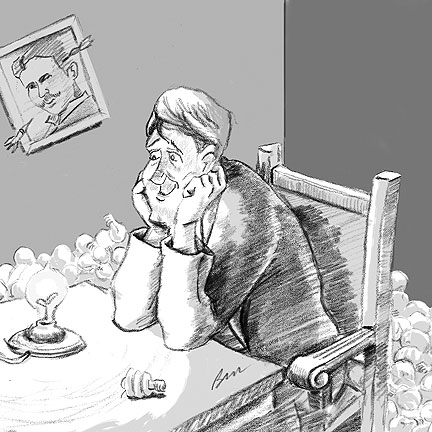 It’s been noted in many places that Thomas Edison [caricatured above] may have failed as many as 1,000 times at inventing an electric-powered light bulb, and when asked about his string of failures, he turned the tables by saying (and I’m paraphrasing,) “I didn’t fail 1,000 times. I succeeded at inventing a light bulb, and it took 1,000 steps to arrive at it.”

A recent New York Times article asked the question “What if the Secret to Success is Failure?” when discussing education and character among school-age children. Do a search on “failure,” and you’ll find inspiring stories of heroes of history who have failed mightily on the way to great successes: Churchill, Einstein, Darwin, Pasteur, Ford and on and on.

And at the recent DMA International Conference in Boston, Biz Stone, co-founder of Twitter, turned failure on its head relative to social media, stating “if someone posts a negative comment about your product, it demonstrates a level of investment and passion about your brand.”

Okay, that’s a lot of fluffy and warm and puppies. But in business – and particularly in marketing – we’re trained otherwise. For most of us, “failure is not an option” for our next product rollout, or our next advertising plan, or our next event. However, if we embrace The Law of Failure, we might find that failing helps to reveal what success really looks like.

In almost every business, professionals fail their way into success, typically in a process of elimination continuum: try › fail › tweak › repeat until try ultimately leads to success. At which point, you test the snot out of that success to ensure repeatability and reliability. This is true in engineering; in medicine; in sports; in fashion; in entertainment; in technology; in a zillion other categories.

In marketing and advertising, (direct, media, creative,) we call it “testing.” But testing is simply an accepted euphemism for “financing failure to yield better strategies.” Why else would almost every big campaign be run through focus groups first?  Why test your spots on samples of your target demographic? It’s not so much that you can see what WORKS, but rather that you can reveal what DOESN’T.

My theory on why it is so vehemently avoided in the marketing/advertising arena is simply because of the money flow. When doing medical testing, for instance, the medical company has an R&D budget to cobble away in a lab for sometimes years at a time. In engineering or technology, all the sunk costs are stacked upfront – sometimes financed by venture capitalists – and millions or tens or hundreds of millions of dollars might be spent to arrive at a new design/product/solution that then gets recouped upon selling/distributing/launching.

But in advertising, the money flow is different. The typical relationship is an outsourcing model (company x hires agency y to develop the marketing program) that puts the pressure on the marketer to justify that spend and that agency choice. It’s our money, so you better spend it wisely. No marketer I’ve ever met wants to hear in the pitch “yeah, we’re gonna spend a percentage of the budget on failing.”

But that’s essentially what’s happening. Sure we do research, we do cluster analyses, we create predictive models. My colleague David Adelman at OCD Media is a media planner who creates predictive models in order to yield what he calls the most “testable propositions.”

The only problem (in advertising and marketing) is that those propositions are tested out in the marketplace, and failure is seen as a scarlet letter on the breast of the marketer (and in many high-profile cases, the agency, too.)

But I propose that failure is not a sad end to high hopes, but rather an intelligent investment in future successes.

When you fail at strategy X, you now have saved an innumerable amount of money because you KNOW that strategy X won’t work (under the current conditions.) You can instead pursue strategies Y and Z. And if they fail, you save proportional amounts, and so on. KNOWING is powerful.  Failure leads to knowing, whereas success is sometimes an intoxicating mix of planned well, guessed right, timed it right, chose a good director, etc.

This might not fly at your company if you’re a slave to the quarterly conference call with the board and have to explain that you’re failing. But if you’re a small to midsize marketer – you’ll never spend money any more wisely than by failing and KNOWING what to avoid in the future.