The news has officially come down, (although it’s been in the works for almost a year,) that Dunkin’ Donuts, the international (yes, they have stores in 36 countries,) brand that was established nearly 70 years ago, is changing its name. 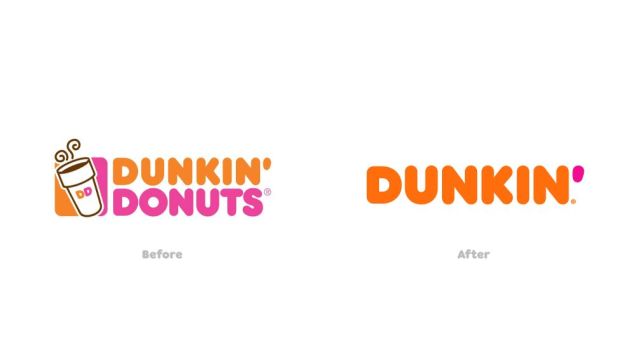 They will no longer be Dunkin’ Donuts, but will officially change their name to simply Dunkin’ as of January, 2019. According to the company’s official press release, the plan behind this switch is to transform the company into a “beverage-led, on-the-go” brand.

To cut to the chase, this is a bad idea. A really bad idea.

Let’s start at the beginning. Dunkin’ Donuts dominates in the donut category, leading Krispy Kreme and Mister Donut by a long way, and by a wide margin in terms of number of stores.

The brand also competes in the coffee category, and meets a strong and persistent consumer need in that area. And for decades, Dunkin’ Donuts coffee has established itself as unique, based on flavor profile (and, some would argue, sheer temperature.)

As the quick-serve coffee category has expanded in the last 20-30 years, and has come to be dominated by Starbucks, Dunkin’ Donuts has pivoted to offer more varieties and flavors of coffee and espresso drinks, and has achieved a strong challenger position. According to Statista, Starbucks has almost double the market share volume over Dunkin’ Donuts in this category, and slightly more than all others combined (not including Dunkin’ Donuts.)

So if you’re a challenger brand in any category (and this has turned into a classic leader/challenger category like Coke/Pepsi or McDonald’s/Burger King,) your goal as a brand should never be to appear MORE like the leader. The goal is to establish difference.

Now, the Dunkin’ brand will still carry donuts.  But when you don’t tell people that it’s what makes you different, (say, by including “donuts” in your brand name,) who’s to say that consumers will inherently know? Especially young, entering-the-market consumers who may not be familiar with the brand’s history?  What will Dunkin’ mean 10 or 20 years from now without context?

The idea of changing the name to Dunkin’ at all seems wholly misdirected.  When the press release states that you want to be a more “beverage-led” brand, the slang word “Dunkin'” doesn’t say “beverages” at all.  What’s more insulting is that the name referred to the verb of actually. dunking. donuts. in. coffee.

So let’s review:  Dunkin’ Donuts is perceptually and verbally moving AWAY from the category they dominate, and CLOSER to a category where they challenge a leader who owns nearly twice the market share, and where their only competitive advantage is average price.  Sounds like a frozen-double-mocha mistake in judgment to me.

Dunkin’ (as they will be called in a few months,) should stick to what they’re good at – good coffee and family-friendly offerings served in modest stores at moderate pricing. AND LOTS AND LOTS OF DONUTS.