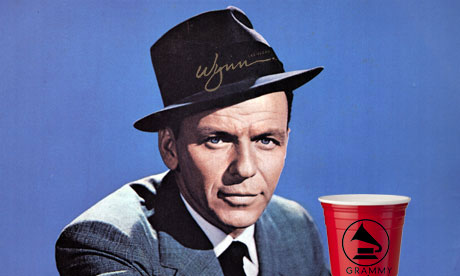 In the words of Howard Mittman, a colleague of mine, and current publisher of GQ, “branded content sucks…basically because it’s branded.” He said this quite directly to a group of marketers and agency creatives during an event I hosted back in 2012 discussing the future of creativity. His words never rang so true as they did last night, when CBS broadcast a 2-hour special to commemorate the 100th anniversary of Frank Sinatra’s birthday.

The broadcast was neither a celebration of Frank Sinatra’s birthday (that’s next week, on December 12th,) nor was it simply a network broadcasting a program of entertainment tailored to its slightly older demographic audience. It was simply (and sadly,) a bloated bit of branded content.

The broadcast bill was (likely) shared between The Grammys® and Steve Wynn, both of whom were on full display during the event. In short, the variety-format music program was basically a 2-hour commercial with paid talent and a sorely lacking bit of licensed footage strewn throughout.

If you’re a real Sinatra fan, this program was a letdown. There was very little actual Frank Sinatra footage, and the lineup of talent was, well, suspect. Seriously. Adam Levine is very good at what he does. And that is NOT singing standards.

Instead, it was a 70-day prequel to “music’s biggest night,” which airs on CBS on February 15th. Hence the lineup of Grammy sweethearts: John Legend, Carrie Underwood, LL Cool J, Zac Brown. And some kind of weird choices, like Nick Jonas, Adam Levine, and, well, isn’t that enough? The only surprise is that Taylor Swift and Bruno Mars weren’t on stage to sing “Me and My Shadow.” (You’re welcome, CBS. And see what I did there?)

According to Nielsen, the show was viewed by 8.74 million people. My guess is that was enough of an audience for these two “producers” to foot the bill for the ad time (and likely a hybrid time-buy,) to gain broad exposure for both of their properties. The Grammys would like the world to tune in on February 15th, and Steve Wynn would like at least 1% of the world to visit his hotel and casino.

It’s perfectly acceptable to promote your properties, and perfectly fine to do it with entertainment content. Brands do it all the time, and most of the time, they do it well. But last night was a prime example of getting it wrong. Mostly because the core audience was ignored, and the subject matter of the program was somewhat mistreated.

Frank Sinatra fans probably tuned in last night to see and hear FRANK. But they didn’t. They got…Adam Levine. So it ends up coming off like a bait and switch. If you’re going to attempt to push your brand through content (it’s an excellent idea,) then remember – as with all aspects of marketing – to keep the consumer at the center of the conversation. Last night could have been something special, but it wasn’t, precisely for that reason.

My thoughts on how they could have gotten this right: